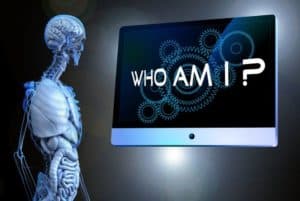 If you start to ask, or Google the question “Who am I?” you get answers that broadly fall between the religious concepts (you have a soul; In many religious, philosophical and mythological traditions, there is a belief in the incorporeal essence of a living being called the soul – Wikipedia) and the scientific concepts (the belief that you are your body, and when you are dead you are dead, that’s it; end of the line).

The application of good Auditing starts to untangle and answer these questions and answer for the person the main thing that is wrong with them.

“The main thing wrong with any preclear is that he cannot disentangle himself from entities and somatic entities, from demon circuits and MEST bodies.  He wants to know who he is and where he is.”
LRH, Scientology: A History of Man [1952], page 61

“The thetan assigning responsibility to the body then becomes the body. This is a general principle.  One becomes that to which he assigns responsibility too often and too long.  He makes it cause and, at last, to be cause himself, he must be the thing.

“People imagine they are in bodies because they are hiding from something and many other reasons.  But these are not important.  The important thing is that bodies were handy to have, once.  They were fun.”
LRH, Scientology 8-80 [1952], page 101

The Eastern religions do far better at answering the question of, “Who am I”, than Western scientific concepts. While researching this Post I came across this interesting statement from one of the Eastern philosophies:

By not knowing the answer to the question, ‘Who am I?’, you keep on creating new identities of yourself, consequently going farther away from your True Self. All the suffering in life is because of not knowing your true identity. Until you realize your True Self, you believe yourself to be the name that has been given to you.

So who are you? In reality, you are an eternal Soul. For infinite past lives the Soul has been hidden beneath a veil of ignorance. Due to this, we have been unable to experience the true Self. – Akram Vignan

This is quite impressive for us as Scientologists as it aligns to what we understand of ourselves, rather than the “man is mud” concept!

“When a thetan believes too thoroughly he is a body, he is generally unhappy, afraid, doubts his own (and validates the body’s) existence and worries about his inabilities.  When he is out of the sphere of influence of the body (a very small one) he becomes serene, confident and knowing. He can handle a body better, can act faster, can recall more and do more while exteriorized than he can while in a body.

“Society, thirsting for more control of more people, substitutes religion for the spirit, the body for the soul, an identity for the individual and science and data for truth.  In this direction lies insanity, increasing slavery, less knowingness, greater scarcity and less society.”
LRH, “The Creation of Human Ability”, page 319

Then, on the other side when we start asking the “Who am I” question from the scientific fraternity we get answers that, to say the least, are difficult to understand and do not align with the way we understand Life and the Universe to be.

Our brains can only hold so much information at once. When there’s too much “information overload,” we tend to get distracted easily and not retain what we’re learning.

“Working memory is what brain scientists call the short-term store of information where we hold the contents of our consciousness at any given moment — all the impressions and thoughts that flow into our mind as we go through the day.”

“All the ‘magic’ of cognition depends, just as life itself does, on cycles within cycles of re-current, reflexive information-transformation processes, from the biochemical scale within the neuron to the whole brain sleep cycle, waves of cerebral activity and recovery revealed by EEGs.”

“Of course your MEST body is always an effect; anybody can come along, kick it, boot it, run over it, play things at it, do anything to it….

“You better locate that part of you which is always cause and then  recognize that you are that part.  And that’s very simple — very, very simple.

“Right here on the middle of your ‘youness’ is an imperishable, completely indestructible motion source.  It is a motion source which itself has no motion.  That is your inheritance as part of divine beingness.  That is it, and don’t think that is a small part of you or merely a part of you, because it’s not.  That’s you.  You have immortality in that part of you which is you; that is immortal….

“… geographically you aren’t anyplace; you aren’t anyplace.  But if you’re alive, if you breathe (and some people do), if your heart beats, or even if you’re out of your body living comfortably without these mechanical motions distracting you all the time, you have a point of beingness and you are that beingness.  And that is very important.  This is the point from which you emanate.  And beingness, in this regard and to this degree, has to be tracked down, because that beingness is cause.

3 thoughts on “Bodies and Thetans”