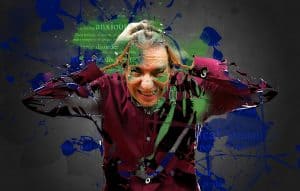 Society today is awash with laws, but without effective enforcement of these laws. Because of the lack of will in enforcing the law, gross lack of control or discipline is bred amongst citizens which often results in tragedy.

Lawlessness becomes the normal mode of operation which is not confined to only one sector of our society. It is on the streets, in our communities and urban areas and unfortunately our homes and schools, where it is perpetrated by ordinary citizens, as well as corrupt practices among the elites and our leaders.

How often do we hear about government officials being sent to prison when they breach the public’s trust – very rarely. Murder and mayhem are perpetrated by the heartless criminals is the most frightening of all the atrocities overwhelms us.

Add to this rioting and war and we have a less than optimum world to live in and bring up our children!

These conditions come about because of suppression. But what is suppression? What is a suppressive person?

Per the Technical Dictionary …

SUPPRESSION, suppression is “a harmful intention or action against which one cannot fight back.” (HCO PL 26 Dec 66)

Also LRH writes in “Stable Data for Handling the PTS”, from “Introduction to Scientology Ethics”, page 189 …

“Usually, the person has insufficient understanding of life or any dynamic to grasp his own situation.  He is confused.  He believes all his illnesses are true because they occur in such heavy books!”

Dispersal would consist of several things such as attributing its source to others and altering its processes or structure. If you feel a bit dispersed reading this Policy Letter, then realize it is about a being whose whole “protective coloration” is to disperse others and so remain invisible. Such people generalize all entheta and create ARC Breaks madly. The second (b) is done by covert or overt means.

Covertly a suppressive person leaves the org door unlocked, loses the E-Meters, runs up fantastic bills, and energetically and unseen seeks to pull out the plug and get Scientology poured down the drain. We, poor fools, consider all this just “human error” or “stupidity”. We rarely realize that such actions, far from being accidents: are carefully thought out.

The proof that this is so simple. If we run down the source of these errors, we wind up with only one or two people in the whole group. Now isn’t it odd that the majority of errors that kept the group enturbulated were attributable to a minority of persons present? Even a very “reasonable” person could not make anything else out of that except that it was very odd and indicated that the minority mentioned were interested in smashing the group and that the behaviour was not common to the whole group-meaning it isn’t “normal” behaviour.

The Suppressive Person is hard to spot because of the dispersal factor mentioned above. One looks at them and has his attention dispersed by their “everybody is bad”.

The Suppressive Person who is visibly seeking to knock out people or Scientology is easy to see. He or she is making such a fuss about it. The attacks are quite vicious and full of lies. But even here when the Suppressive Person exists on the “other side” of a potential trouble source, visibility is not good. One sees a case going up and down.

On the other side of that case, out of the auditor’s view, is the Suppressive Person.

The whole trick they use is to generalize entheta. “Everybody is bad.” “The Russians are all bad;” “Everybody hates you,” “The People versus John Doe” on warrants, “The masses,” “The Secret Police will get you.” Suppressive groups use the ARC Break mechanisms of generalizing entheta so it seems “everywhere”.

The Suppressive Person is a specialist in making others ARC Break with generalized entheta that is mostly lies.
HCO POLICY LETTER OF 5 APRIL 1965 HCO JUSTICE DATA RE ACADEMY & HGC HANDLING THE SUPPRESSIVE PERSON, THE BASIS OF INSANITY

How do you feel after reading the newspaper, watching TV news … CNN, BBC? What is actual fact? What is fake news? How much generalized bad news is put out?

If you feel unsettled by any of the above just realise that you are in the presence of suppression.

Now all of this can make one feel rather “down tone”, well there is GOOD NEWS!

The full list of the 12 Attributes of a Suppressive or Anti-Social Personality are given in HCO PL 27th September 1966 – THE ANTISOCIAL PERSONALITY.

This consists of things which such a personality cannot detect in himself or herself.

“However, the list given above consists of things which such a personality cannot detect in himself or herself. This is so true that if you thought you found yourself in one of the above, you most certainly are not antisocial. Self-criticism is a luxury the antisocial cannot afford.

They must be RIGHT because they are in continual danger in their own estimation. If you proved one WRONG, you might even send him or her into a severe illness.

This data is an essential part of your “How to survive on Planet Earth” Toolkit! So, if you have not already done so we would urge you to go to your nearest Ron’s Org or Group and do the PTS SP Course. A thorough understanding of these materials is needed to survive in today’s world!