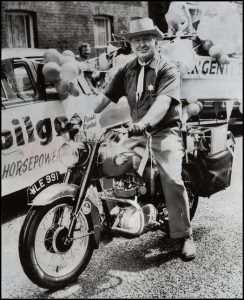 Paying tribute to LRH, who he was and what he has accomplished is a fitting way to start the New Year, 2023.

Lafayette Ronald Hubbard was born on the 13th of March 1911 in Tilden, Nebraska (USA). He spent his childhood on a ranch in Montana.

From the age of 14 to 18 years old, he travelled throughout Asia (his father was in the US Army) and young Ron came into contact with Chinese and Hindu monks and thus, with Eastern philosophies.

He began to explore the spiritual nature of human beings. He returned to the United States at the age of 19 and enrolled at George Washington University to study engineering.

As an integral part of his studies, he participated in one of the first nuclear physics courses. He earned his living during his studies and later, as a professional writer. He succeeded in his study of the human mind and wrote an unpublished book.

He participated in various explorations during his youth, sometimes as the expedition leader. During World War II his spiritual studies were interrupted. In 1944 he was stationed in the Philippines.

In 1950, he published “Dianetics – The Modern Science of Mental Health,” a book on the anatomy of the human mind in which he gives the precise method of how to resolve the traumatic experiences of life.

The Dianetics Foundation was created in order to continue more in-depth research of the human mind. And from there, leading in an increasingly spiritual direction to a new philosophy called “Scientology”. Its purposes and techniques aimed at improving the abilities of the human spirit. Scientology was a huge success and in a few years, a global organization had to be set up to coordinate and ensure the correct application of this new technology.

In 1966, L. Ron Hubbard retreated from his official responsibilities in the organization to dedicate more time to his research, which he had conducted continuously since 1950. He delegated his previous responsibilities to others.

Unfortunately, the organization he founded, and its original purpose were increasingly undermined over time.

The circumstances of L. Ron Hubbard’s death including the exact date, have not been established.