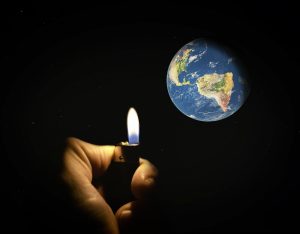 A vital document to read and understand for those walking the Road out!

No truth can be half way approached. If you got that far and didn’t go any further, you would fall flat on your face and be in quite a mess. There is no substitute for totality with regard to truth. In other words, you’ve got to know all of it.

I’m applying this to the field of philosophy. The famous witch doctor puts his foot on this line and says, “There really is no time” and he doesn’t go any further than that. He teaches everybody, there really is no time. He’s put himself and everybody around him with one foot on the banana peel and the other in the grave, see. He hasn’t told them why there is no time, see. He hasn’t told them anything. Everybody goes around saying, “Well there is no time, so it doesn’t matter”, but yet, echoing in around in their skull is the fact that it’s true, there is no time. That is a truth, but it is so little of the truth. Without somebody going the whole way, it actually becomes quite dangerous. The whole race would then simply go in apathy and that would be the end of it.

And that is what has happened in almost all philosophies that I have ever heard of. See, they get some corner of some truth and then they don’t walk down that road and they go no further than this. You see? And they sit around on mountain tops regarding their navels and they do weird odd ball things, and they wonder why they’re not getting any better if they know so much. Well, the reason they’re not getting any better, even though they know so much, is because they started on the road to truth and they never made the passage. Having gone that distance, it wrecked them. Now this in itself is soul chilling.

This pronounces something quite interesting to you. You can say, well we started into Scientology. Yeah, you started on a road toward truth, didn’t you? The only fatal thing you can do, if you know this about your pcs, and you know it about those around you, and you know it about some of them fallen by the wayside, you instinctively feel it. Having started, ceasing to go is one of the most fatal things they could do. Now you look at this with some sadness because it’s actually a very fatal action.

Let’s take Einstein. Einstein was walking on this road. He had finally gotten up to a point where he was trying to integrate life into his other equations and he was groping, groping, groping and he left one of the most thoroughly remarkable messes for ages forward to figure out that you ever cared to have anything to do with. When he died he had a bunch of computations. He was going towards something that explains everything, and he hadn’t arrived any closer than a bunch of symbols. Having figured out his various equivalents of constants, and speeds of light, matter, energy, space, and time, having figured these out, he was trying to squeeze life into this somehow or other, and he left an awful hodgepodge of figures which everybody worships back in Princeton. And they’re busy trying to do something with this now and it’s all very complex. In fact, everybody around there is half way spinning, what the devil were these last equations that Einstein wrote. He was just trying to integrate life with the universe. That is, everybody would say, an over-simplification. No, it isn’t, that’s a more truthful statement. That’s closer to the truth than they are. He was just trying to integrate life in the universe mathematically. That’s all.

The old Encyclopedia Britannica says in order to understand space and time, you had better understand the mind because it’s very often, very possible, that space and time are simply generated by the mind, how do we know. Interesting. That’s in the 1890 edition of Encyclopedia Britannica. Marvelous insight. Very well put. I noticed it hasn’t been followed by anybody else. You notice that science today says the mind is so in error, it is so inaccurate, is so this, that it is just nothing in mechanics at all, but mass is all and the mind is nothing, see. The universe is everything, and the material things in existence are this and then he is just a spontaneous combustion from mud, and this is all he is, and he’s just a lousy bum, and you talk to one of these boys and their whole orientation is in this direction. He will say, “Oh a computer, oh well a computer never makes a mistake. This is their run, it puts out all these marvelous things, look at these marvelous things. Human mind, agh, human being agh…” [mutters]. Yeah, listen to these boys. I’ve tried once in a while, timidly for me, to say, “Who feeds the data to this computer?”, “What feeds the data to this computer, and get an answer out of it and who inspects that answer after it has been printed but the mind, the being, the person, the individual.” Yak-yak-yak, they can’t get this point at all, see.
Taken from the lecture SHSBC-392 Track and Bank Anatomy given on 14 July 1966 by L. Ron Hubbard)