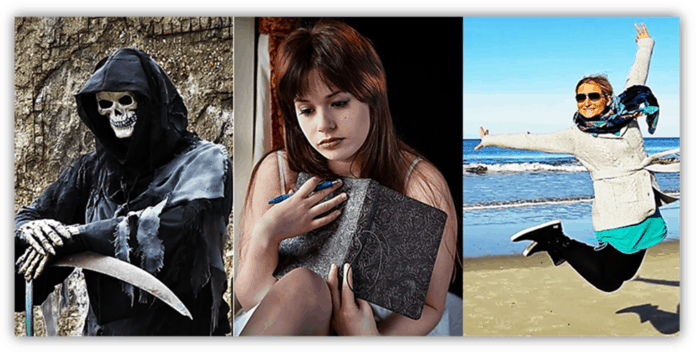 We have already examined the Tone Scale previously regarding levels of ARC, but there is yet another basic factor that affects our tone level, and that is our level of Survival as you can see in the following data from Ron:

“There are several triangles in Dianetics, outside of the fact that the word Dianetics starts with a Greek delta D which is depicted as a triangle.

There are three things a man wants to know with regard to existence:

Firstly, why does it come about at all?

Secondly, what are we doing here?

And thirdly, how are we doing it?

What, why, how. Why, how, what. It’s another series of triangles.

Right now we have ‘a what’ we are doing here, and that is a duality, not a singularity. We are surviving, and survive is related to a datum of comparable magnitude, succumb. One survives or succumbs. It’s one or the other. But it’s not either/or  … One survives, in other words, in terms of magnitude and longevity. …

Let’s take a look at a two-dimensional graph of ‘Dianometry’, the measurement of thought.

The center line is zero. Over to the left is wrong. Over to the right is right. On either side of the series of vertical lines is infinity.”

Being right is surviving and being wrong is succumbing. If a person is more right than wrong in his lifetime on an average, he goes on living. If he is just a little more right than he is wrong consistently, he will do all right, unless of course he hits one where he is suddenly very wrong, and then that’s too bad.”

If one knocks out any one of the dynamics in figuring out these problems and only operates on three of these dynamics, ignoring the fourth one, there is going to be something wrong about the equation and one is going to have to take the consequences. So, if one ignores self but pays attention to the next three, his problems are going to be just as wrong as if he ignored the fourth and took the first one.”

“If the person were absolutely wrong in everything he could do, there would go man, the universe, everything. If he were absolutely right, even for a moment, on all dynamics, that would pose the fact that everything would survive for infinity from then on, which is not only impossible but incredible.”

“How right can you get? How wrong can you get? Well, you could get so right that there would never be any death anymore for anything. Or you could get so wrong that everything would die, including the whole universe. … An individual’s death is very slightly wrong compared to the whole race, though people don’t like to see it. But in the very broad sense, if one man dies it is going to leave a hole.

The person was necessary and in his own line was indispensable, whatever he did. Start pulling people out of an organization left and right, saying ”Well, this person has no function, ” and things will start going wrong. Of course a man could be very consistently wrong as part of an organization; so all of these things require adjudication for right and wrong. There is no perfect solution, but we try very hard to attain one. It could be summed up on this basis: How wrong can you get? Dead!”

So our personal level of integrity is absolutely crucial to being able to live a sane stress-free creatively survival life. Without it we dive into corrupted irrational life patterns filled with dishonesty, deceit, and secrets that send us into a headlong dive down into a steep succumb. That’s when we sink into everything we never wish for ourselves.

“How right can you get? Infinity of survival.

As we go up the line, these zones are labeled, and they go up on a gradient. Complete apathy would be death. Right next to it is feigned death. Coming up the line are various degrees of apathy, and then you get into resentment and anger, and then into boredom, and finally to where the person is cheerful and easy to get along with.

The test of any philosophical level postulate is whether or not it can be observed in real life. Any of these postulates become real to you only when you yourself have observed them, not because you have been told they are true.”

“You should learn to predict the rightness or wrongness of what you are doing … you will find out why you are doing some of these things.

After a person has this terrific anger where he is going to tell the other person off, we get apathy toward this problem and we get a break in communication. He doesn’t want to have anything more to do with this person. He feels bad about it and he just doesn’t want to have to be bothered. That is communication as it goes down toward apathy, pulling down affinity and reality with it. People can get angry at other people and not want to communicate with them anymore. …  Know that Joe isn’t real anymore. He doesn’t exist.”

So now you can see how your level of survival across any one of your Dynamics is affected as you allow your level of ARC (Affinity – Reality – Communication) to rise or fall.

“Reactive thinking would be thought tangled up so thoroughly with matter that it could no longer operate harmoniously over it and about this time thought would detach its attention units and the person would be out of communication with himself.”

“One of the first things a person does when he starts to get very aberrated is to cease to enjoy life.  They are very frantic about the whole thing, but actually with no enjoyment. They have broken off communication, because affinity and agreement are broken. Psychosomatic illnesses follow in the wake of this.

What is needed is a harmonious intermingling on every dynamic.

And the goal is to disentangle points of turbulence on each one of the dynamics so that a man can not only handle himself but be himself and enjoy himself on the first dynamic.

Once we get the second dynamic straightened out, we can have affinity with future generations. If we are in disagreement on that subject, the rest of it will start to fall down too.

Our end goal as far as the third dynamic is concerned is to get a person into good enough condition so that he will get along with his fellow man. … On the fourth dynamic, you want man in harmony with man.

So here we have a simple summation of the level of survival on each of the lower bands of the Tone Scale:

“Anger is non-survival, but it is better to fight than not to fight at all.

Being afraid is definitely Non-survival.

Apathy is the acceptance of this non-survival situation.

Pretended Death is nothing more nor less than accepted death.

We take this and divide it off and we find the standard reactions of individuals for these various moods.“

All these references above are from: