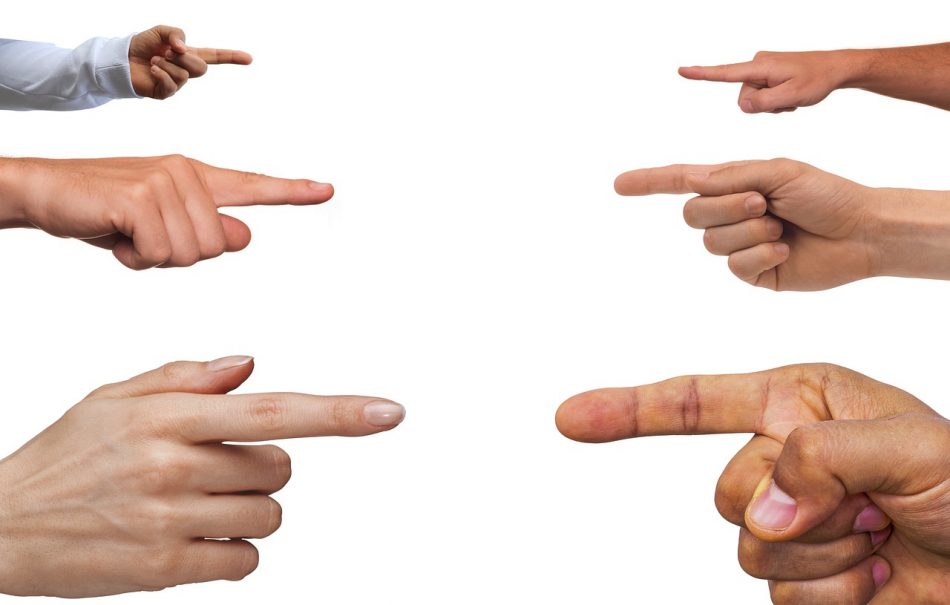 This is a game that should not be played!

“Anything you blame becomes cause; it becomes higher and more powerful than you and it can therefore and thereafter regulate you. You blame *it*-you say, ‘There’s cause’-and you are saying at the same time, ‘I’m not cause.’ And thereafter from that source you get your orders.”
Ron Hubbard Excerpt from “Cause on All Dynamics,” Research and Discovery Series, (old) Vol. 9, page 317.

You should not minimize yourself as CAUSE. It is your greatest ability.

“Being blamed sometimes blunts being CAUSE. But if one’s total ambition is to be blameless, the best situation is to get one’s name on a tombstone. And it’s no fun being dead.

“A thetan, spirit, you, is actually capable of tremendous creation.  But when you have taken an irresponsibility for some part of your ability to create, you can then continue to create without knowing that you are creating.  Now we don’t know that you aren’t creating the whole physical universe.  We don’t know that you aren’t creating everybody you see.  We don’t know this positively; this is simply a matter of ‘Who’s God?’  Well, you’re the logical candidate.  You’ve accepted the blame for everything else, you might as well accept the blame for that one.”
RON HUBBARD, THE FIRST POSTULATE Tapes, from Lecture 13, “The Rock.”

“There is a cycle of responsibility.  One acts and seeks to negate his responsibility for such action by placing the ‘reason’ at another’s door. This works as long as one succeeds in making another accept responsibility for the action.  The moment this action fails, and another does not accept it, the entire action comes back at one.  It is then a matter of fault and fixed (by another) blame and stirs the emotion of guilt.  Before this cycle begins, there is no aberration, no matter what has been done, no matter what has happened to anyone.  The action occurs but is no cause for discussion or justice until one seeks to shunt cause elsewhere than self.

“Rationalization is wholly an attempt to shunt responsibility.  Whatever occurs to one is actually his own responsibility….”
LRH, Advanced Procedure and Axioms [1951], page 124

“The more you make a populace quiet and motionless, the greater the crime rate you will have. The influence of TV, for instance, on the general crime rate around the world has been remarked upon many times. But the program material is what is being blamed, not that the child is being pinned motionless. And that is what’s happening. I don’t care if you showed them Little Orphan Annie sighing over the dog in just one pose on a nonmoving picture and so forth, with maybe some violin music playing in the background. And if this was all there ever was on TV and the children still sat in front of TV at an active time of life when they should be moving, you’ll get a higher crime rate. It’s inevitable. See? All you’ve got to introduce is motionless, you get aberration. Because you’re preventing people from taking over the situation.”
From SHSBC tape “Question and Answer Period: CCHs Auditing”, 23 June 1961.

“The reason your preclear is fixed to a MEST body lies in his inability to produce energy enough to know and to get away from one.

“His career with bodies is as follows:

“He hurt them by accident at first.

“Then he hurt them without understanding they hurt by using their sexual emotion.

“Then he blamed them and said and felt he would have no responsibility for them.

“Then he felt the emotion of no-sympathy for them.

“Then he felt sympathy.

“He began to propitiate.

“He wanted to make amends.