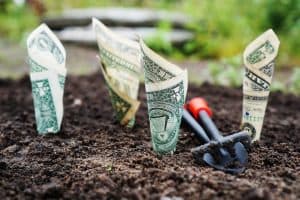 “… a person’s position on the Tone Scale is something like working with a bank account and not working with a bank account. You have a nice cushion of $100,000 in the bank. Well, you see, you can afford to make a mistake. That $100,000 represents a lot of survival in terms of years and lots of MEST and lots of service and so on. So you’ve got $100,000 there worth of survival, and you could be wrong; you could make two of three $10,000 deals that would go very wrong. You’d lose these $10,000 deals and you’d still be all right.

“But let’s suppose you’re living an existence without a penny in the bank, and let’s make a $20 error– nrryow!  That’s awful wrong.

So very materialistically, we could draw the Tone Scale in terms of money.

“Of course, I should amend that immediately and tell you that as you go up the Tone Scale, there’s another law in operation. It is crudely expressed, but you just can’t throw very much theta around without MEST moving in under it. MEST sort of has an affinity for theta, and you throw much good theta around and the MEST actually moves in under it. And the person with the $100,000 at 0.5 wouldn’t have anywhere near the benefit of that $100,000 as a person at 8.0 would get out of fifty cents.

“A person at 8.0 could probably walk out on the street without a cent  in his jeans and walk down the block and find out that he’d – two hours later and three blocks later that he’d had a wonderful dinner, that he’s attended a party and that somebody was going to give him a ride in a nice car.” – LRH, Dawn of Immortality lectures