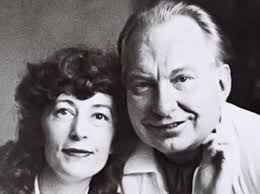 This article, by Ron’s Wife, Mary Sue, was written back in 1955 and gives a very valuable insight into Ron’s life. It was first Posted some years back, but it is something to reflect on again.

Many people have questioned me regarding Ron’s research and investigation into the human mind. The funny thing is that the majority of the hundreds of research cases on whom he worked to give us the principles for building a better world were never aware of who he was or what he was doing. They had never heard of Dianetics or Scientology. All they knew or were aware of was that they felt better, their bad eyesight or maybe the limp in a once injured leg was gone.

Wherever we have been it has always been the same-in England, Belgium, France, Germany, Spain, or here in our United States-rich or poor, young or old, diseased or insane, there has always been the hidden man, woman and child behind the scenes who were helped and who, but did they know it, were contributing to the furtherance of a science.

To me, the most important foundation upon which Dianetics and Scientology is built was stated in the First Book-that is, “Man is basically good.” I know of no one who believes this as strongly as Ron does. It is my feeling that this alone in times of contemptuous press, financial difficulties, the betrayal of friends-times when it seemed that all he had built was crumbling to pieces, kept him going, kept him persisting to his goal of helping MAN.

In Phoenix after the fall of Wichita, a producer with whom Ron had worked in Hollywood came to see us at our small apartment. He was offering Ron what would seem to the ordinary man like ice cream and cake for eternity. After picturing this dream in the clouds, he said to Ron, “Now, really, do you think this Dianetics, this research of yours, is worth it?” Ron sat for a very long time-silent, his eyes closed. Finally after what had seemed like hours he opened his eyes, and said, “Yes! Yes I do.”

After his producer friend left, I asked him why he had taken so long to answer. He replied, “I was watching pass before me a parade of all the people I had helped, their expression one of hope and faith in the goodness of the future. Nothing can be worth more to me than that.”

And that’s the way he is. His belief in the innate goodness of Man, in being able to bring this and Man’s abilities to the fore continues him in his research. It enables him to communicate to anyone despite their physical disability to do so, or any language barrier. His preclears are all over the world. The time he has spent processing is too vast to enumerate. Even he does not know the hours; he works and there is no time to him. This used to be very disconcerting to me.

I remember one time in Spain; I had spent the whole morning shopping in the market and the whole afternoon preparing dinner on one oil burner and a charcoal fire. This was a difficult process for one used to supermarkets and a gas range. Ron had gone to the park. Dinner time passed. The food got soupy from reheating and the charcoal supply got nil. My patience wilted and I went to the park. I found him sitting at a sidewalk cafe, a middle-aged Spaniard with him. He motioned me to sit down and be silent. He was processing.

The fellow had been in the Russian army, had fought in the battle of Stalingrad and then had been forced into servitude in Siberia. His legs had been so badly frozen that they would not bend at the joints. This peglegged walk was to carry him through life and to deny him work because of his slowness. After Ron had finished, we invited him home to dinner. He walked naturally again.

His realization of what had happened to him did not come until he walked to the door to leave. He suddenly stopped and began shouting, “I walk-l walk.” There are many such people and many more.

You in the field have not been idle either these five years. Maybe someday we can realize Ron’s Project. Very few know about it, but someday he hopes to have every auditor in the field “who is worth his stuff as an auditor” on the HASI payroll. They would be given some person-someone in high government position, someone in the arts, someone in religion-people who are in the public eye and who supply thousands morale in the forms of good public works, books, paintings, humor, spiritual aid, to bird-dog until they submitted to processing.

These auditors could then simply process and promote without depending upon public approval or financial support which is dependent upon public approval. Maybe someday we can accomplish this. It is a goal worth working toward. We, too, will have a better world someday. It is Ron’s dream and yours and mine.

1 thought on “The Way Ron Works”