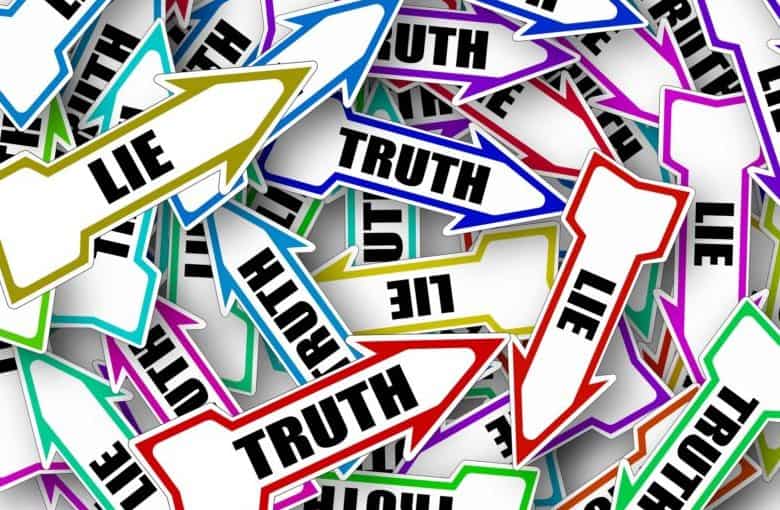 We are often faced with the quandary of whether we are being told the truth or not. Unfortunately the lower a person sinks on the Tone Scale the less you can trust what a person is telling you. So unless one really understands the LRH data given below one can be led hopelessly astray. 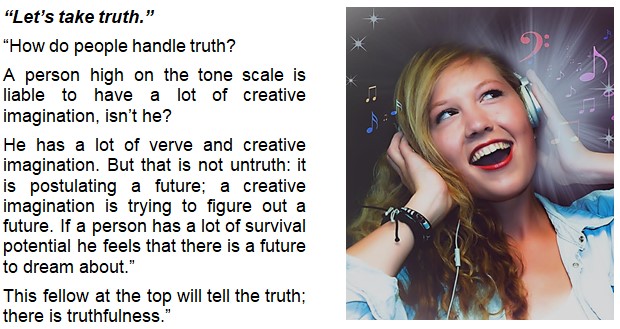 So here what happens to “Truth” as the person sinks on the Tone Scale?

We know that a person, when he gets antagonistic toward life in general, may sometimes look for an excuse to get angry. He looks around and tries to pick a fight – he embroiders it a little bit. So here at antagonism we are starting to get some lying.

Now, anger lies at 1.5. – The angriest man you have probably listened to – he talked a lot of anger – he never seemed to tell much truth. … It seems to be that when one gets to a point of one goes on saying things about which to be angry whether they are true or not – there is quite a departure from the truth.

The next step down is fear. Would you trust a person to tell the truth who was afraid? … Fear made him tell you a lie. Social lying is the fear of social consequences. Have you heard that kind of talk? That is covert lying in an effort to convince somebody that he is telling the truth, when he is really thinking, “I’m going to cut you down to size if I get a chance.” But he is saying, “You know, I really want to help you. It’s too bad that people don’t like you more.” This is covert hostility, and it is down in the band of fear.

Now, what happens to a fellow who is very afraid— He weeps. He goes down into this next level, grief. What about truth and weeping? You tell some news—and he will tell you all sorts of reasons he is weeping. You will get the most remarkable statements regarding his tears.

The individual at that level is defenseless but he can still be salvaged. He wants help from the rest of the human race, so he cries, he pleads for sympathy, and he doesn’t plead for it with truth.

If you want to check this over against your own reality, you will find that the reasons for tears and the reasons a person cries for sympathy are not true—for example, the fellow who says he has heart trouble but doesn’t have heart trouble. He is asking for sympathy. He is along the grief level.” 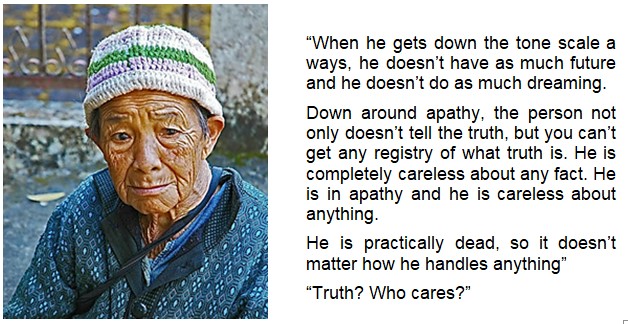 “So the handling of truth, then, is what you might call a gradient scale.

Down at the bottom is complete carelessness about it; this fellow doesn’t care whether he handles truth or falsehood or anything. At grief is a perversion in the direction of asking for sympathy. At fear is a perversion to excuse fear, and up at anger is another one to give reasons why one has to be angry. At 2.0 the individual is telling people that there are reasons why he is antagonistic and he is picking them out wrong. And way up at the top you get truth. It starts to ride way up there because the fellow is not afraid, he is perfectly happy, he hasn’t got an ax to grind about anything. He will tell the truth—unless he is postulating a future reality, and then watch out, because sometimes people below that level don’t realize that people up here do creative talking.

That is one column on the tone scale chart. In such a way, human behavior can be invalidated, validated, extrapolated, turned upside down, inside out and examined, codified, lined up empirically, tested against individuals and so forth. But this first extrapolation of the behavior of an individual in life when faced with dangers, and of these pattern behaviors, keeps summing up to this list of things.”

2 thoughts on “Truth versus Lies”