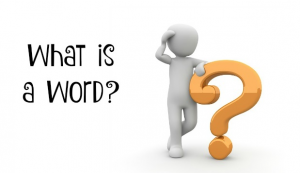 The definition of “WORD” (a noun):  Is a unit of language, consisting of one or more spoken sounds or their written representation, that functions as a principal carrier of meaning.

The key here is that a word “functions as a principal carrier of meaning”.

LRH has a great deal to say on the understanding of words and the clearing of words (all definitions of the word), when studying his writings, (or anything else for that matter) A misunderstood word, as he emphasizes so often and in so many ways prevents the meaning of what is being discussed or read from being understood.

Here are some of LRH’s quotes on the subject of words and not understanding them.

“Stupidity is the effect of misunderstood words.  “In those areas which give man the most trouble, you will find the most alteration of fact, the most confused and conflicting ideas and of course the greatest number of misunderstood words.  Take ‘economics’ for example.  “The subject of psychology began its texts by saying they did not know what the word means.  So the subject itself never arrived….  “THE EARLIEST MISUNDERSTOOD WORD IN A SUBJECT IS A KEY TO LATER MISUNDERSTOOD WORDS IN THAT SUBJECT.”
LRH, HCOB 4 Sept 71 III “Simple Words”, Technical Bulletins volume S2, pages 172-173

“There is one key datum with regards to straightening out a student’s inability to understand something:  CONFUSION OR ARGUMENTATION, UPSET OR STUPIDITY, COMES FROM A MISUNDERSTOOD WORD WHICH IS EARLIER THAN THE ONE THE PERSON IS TALKING ABOUT.  THE WORD THAT IS MISUNDERSTOOD IS ALWAYS EARLIER THAN THE ONE THE PERSON IS NATTERING ABOUT.  “That is always the case.”
LRH, HCOB 8 March 89 “Word Clearing – Key Datum”, Technical Bulletins volume S2, page 244

And it applies to getting things done …… Cycles of Action! Not often realized this is vital to understand!

“A cycle of action is the sequence that an action goes through, wherein the action is started, is continued for as long as is required and then is completed as planned….  “Just as a misunderstood word can prevent a person from understanding the remainder of what is heard or written, a misunderstood can prevent a cycle of action from completing.  “This is extremely valuable data as it gives us the major reason people can’t complete cycles of action.  It is utterly amazing and magical.  An area is plagued with not-dones and half-dones and no products resulting and one would swear that the reasons were infiltration, sabotage, evil intentions, you name it.  But in the majority of cases it will be found that the above discovery is operating.  The person has a Mis-U (Misunderstood Word) on a key word involved in the cycle of action.”
LRH, HCOB 17 June 1979 “Crashing Mis-Us: The Key to Completed Cycles of Action and Products”, Technical Bulletins volume S2, page 427

With all words on any subject fully understood you get ……

“A student who understands all the words on the page he is reading will be able to read the page aloud perfectly.  He will feel bright and alert and will fully understand what he reads.

But when a student passes a word or symbol he doesn’t understand, the misunderstood causes an interruption of his voice or physical beingness.  His voice may change, or he may stumble on a word or make a face or squint his eyes or react in some other way.”
HCOB 30 Jan 73RE “Method 9 Word Clearing The Right Way”, Technical Bulletins volume S2, page 249

While on the subject of words, here is a rather interesting poem we came across:

The Power Of Words – Poem by Omkar Atale

Words can illuminate a man,
Words can make one weep;
Words can hurt so much,
That a man cannot even sleep.

Words can hide the truth,
Words can strike the heart;
Words can provoke the youth,
To make a revolution start.

Words can give one freedom,
Words can push one to heights;
Only words have such powers,
To separate wrongs from rights.

Words are more than missiles,
That can make one just die;
but words, if hit, cause much damage,
That makes one forget to try.

Words before being spoken,
Are under our total control;
But after we speak the words,
We fall under their control!